The featured artist for September 2021. 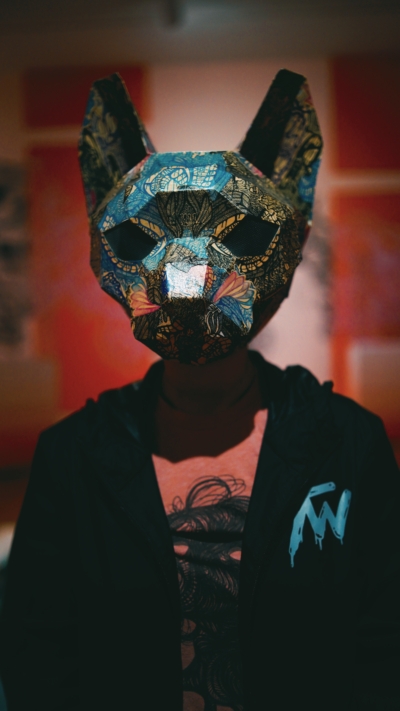 Owl was born in Bogota, Colombia, where she spent a lot of her time in the family’s printing
warehouse. She immigrated to the United States in 2001 and spent time working in her parents’
print shop through her teens. This constant exposure led to her current interest in printmaking
and abstraction. She began developing the complexity of her ecosystems and currently applies
her love for abstraction to her drawings, body painting, murals, installations and screen-printing
projects.
Owl has been a member of several artist collectives in Charlotte working to curate and create
hand-crafted, original art—screen-printing, design, installations, murals and more—to breathe
life into bare spaces in the heart of the city. Her current affiliate, Brand the Moth, is a woman led
collective that works with paint, branding, and uses positive messaging to expose vehicular and
pedestrian traffic to street art, murals, and creative marketing and branding. They also work to
provide a safe space for emerging artists to feel nurtured and supported.
To learn more about Brand The Moth follow on Instagram: @thecocoon.clt.

Artist Statement
Having had an interest in patterns and mark-making all my life, I eventually became interested in
street art and exploring other media, including printmaking and painting. While working on my
Associate in Fine Arts, my artworks grew in complexity and became more abstract. I became
intrigued by the idea that an image can look complete as a whole, yet upon closer inspection one
sees that it consists of marks that are each unique. While the lines all end up where they belong,
each motif is composed of similar lines that follow different paths. By not having a preconceived
idea, my initial lines allow me to react in the moment and take chances with mark-making. The
works become their own curious ecosystems of imperfect marks, complex patterns, vibrations,
and layers that transcend time and space. This allows for me to create atmospheres where things
and people can interact with my version of a different depiction of the cosmos.