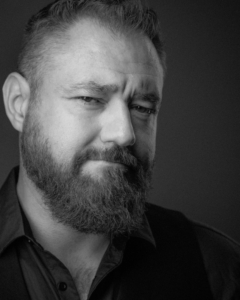 Ryan Sumner is a studio photographer at NoDa’s Fenix Fotography. And though his literal and artistic home is NoDa, his fine art work has allowed him to travel the world extensively—taking him and his many cameras to Hawaii, Germany, the Netherlands, thrice to France, multiple trips to the American Southwest, and Mexico. Sumner’s subjects often have circus, acrobatic, dance, and yoga backgrounds and he tends to work with a small set of collaborators repeatedly.

Sumner sees himself as a classicist heavily influenced by the Greco-Romans, the Renaissance, and Belle Époque Europe. Born in Raleigh, Sumner spent a lot of his early childhood in our state’s museums.  As a college student in the mid-1990s, Sumner began regularly attending NoDa’s gallery crawls, falling in love with the (then) gallery-filled neighborhood and planting the dream of a life lived in the arts.  After college, Sumner worked for over a decade in designer and curator roles at the Levine Museum of the South, The Charlotte Museum of History, and as an exhibition consultant for the archives at Johnson C. Smith and Fisk Universities.  Even today, Sumner rarely visits a city without seeking inspiration in its temples to the Muses.  In terms of living influencers, Sumner has studied extensively with photographer Kim Weston, grandson of Edward Weston, one of the twentieth century’s most influential art photographers. He also sought out mentorship from Renée Jacobs, a renowned female LGBTQIA photographer of nudes, currently living in France.

Sumner’s work has been showcased in juried shows at The Charlotte Art League, The Light Factory, the Southeast Center for Photography, the LightBox in Astoria, Washington and in a photography festival in France.  This is his second solo show at The Artisan’s Palate.

I am drawn to photographing human figures in natural and man-made landscapes as an exploration of ancient nature-based spirituality, the Devine Feminine, and concepts of birth, sex, and (increasingly) mortality.

The figures’ abstract surface, shapes, angles, textures, and the tension in and between bodies fascinate me. In nude figures, I find a powerful symbol of self—with the subjects standing in for my own psyche.

I often draw upon mythology and religious iconographies, particularly where they intersect with shame, identity, and sexuality. Much of my work is inspired by feelings of isolation, self-imposed captivity, and darker psychological states; while others explore peace tranquility, and fullfilment.  This exhibition is mostly comprised of recent work made during the Pandemic in Mexico, France, and Wyoming.